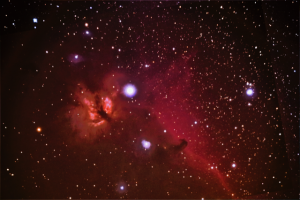 The sky was beautiful last night.  Early in the evening of  late November the Summer Triangle is high in the sky, though the temperatures clearly say it’s Winter.  The wind came and went.  While never strong enough to vibrate the instruments, as it got colder a sudden breeze was unpleasant in my face.When we arrived, Betelgeuse was just rising, by 9pm Orion was the showpiece of the evening.

The Andromeda Galaxy, M31 is near the zenith now.  I’m used to finding it by tracing on the sky guidelines from Cassiopea and Andromeda, then pointing my binoculars or telescope to their crossing point.  When I looked at that position, I was intrigued to see by naked eye just a faint suggestion that there was something there.  I put my binoculars to my eyes and sure enough, it was the galaxy.That was very exciting for me.  The sky at Caledon has glow around most of the horizon, and I’ve never considered it dark enough to see M31 with my naked eye.  I can do that at darker locations, but not at Caledon.  I repeated the experiment a dozen times, spread out in the evening so the target had moved.  At the zenith, where the sky is darkest, M31 is just barely naked eye at Caledon.

By 10:00  we were losing Orion to clouds, most of the sky was covered,
and we went home.